Back To The Target For An Inside Approach 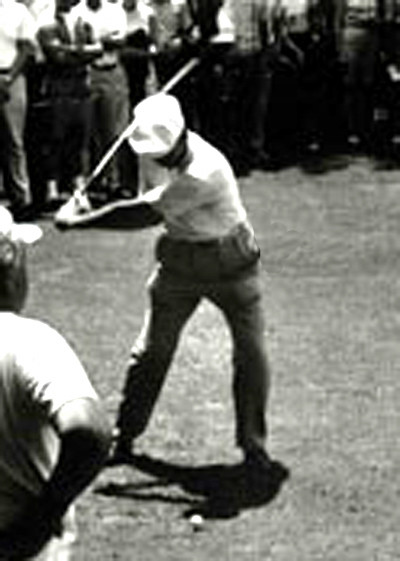 The golf swing works in a semi circle arc. The desirable clubhead path would work from the inside on the entry path, it would square up to the target line right before and right after impact and then it should start to work around again. Ideally the clubhead would never get outside or beyond the imaginary target line that would extend through the middle of the ball in line with where we are wanting to aim.

Getting the clubhead out to that target line too early on the downswing or approach is the major fault of the poor golfer. Their impact becomes a glancing blow across the ball resulting in a weak flying pull or push shot that generally will slice also. How do we help ourselves solve that incorrect swing path?

A simple way would be to feel that your back stays closed off for as long as you can into the downswing. See Ben Hogan above.

Keeping the back to the target is nothing more than shoulder turn. Resisting the urge to unwind the shoulders and upper body too soon helps open up the slot for the arms and the club to move in. Closure is also spine tilt- which is important. Tilt and closure is the ability to keep the body moving as the arms and hands release the club. Power and control are now in your fingertips.

Have no fear about delaying the body rotation by concentrating on this feeling. There is no way the body will not want to unwind. It will happen at the right moment and will get the clubhead moving faster at the same time.

Back To The Target from Golf Aus on Vimeo.