Mishits On The Toe Of The Club? - Here's A Reason Why It Happens

A very common trend since the advent of the large headed driver is mishits ranging all over the area of clubface- yet rarely in the middle of the face!!

Bigger lighter clubheads encourage the golfer to swing too hard on the way down to the ball in an attempt to create as much speed as possible and hope the ball gets in the way.

As a result -especially in the driver clubs, we see toe strikes. A mishit as such distorts the clubface (see video above how the clubhead fans open due to being struck out on the toe of the club) and power is lost.

The over aggressive over accelerated downswing will generally cause the golfer to stand his body up- bring the shaft across the ball and the shaft will stand up much higher at impact than it was at address.

Therefore the toe of the club is being swiped across the ball. Solution. Swing smoother- Feel the hands at a similar height when striking the ball as they were when you setup.

You may think you won't hit the ball as far but if you start middling the ball in the centre of the clubface it will go farther - that's a guarantee.. 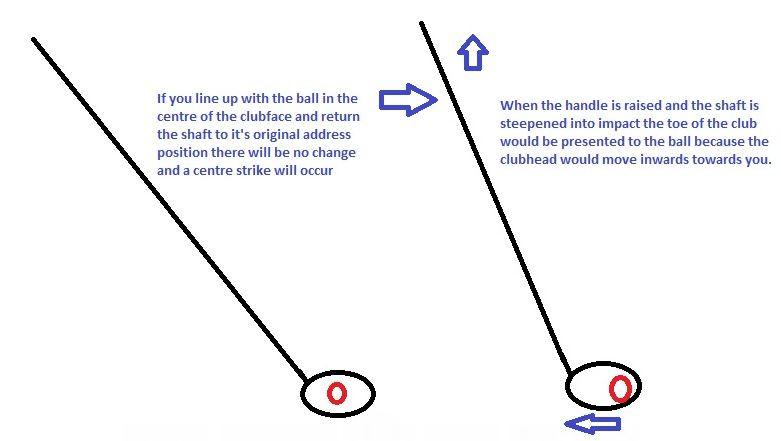